The Ba’ath Party was made famous in the West by the late Iraqi dictator and one-time ally of the United States Saddam Hussein. It is largely regarded in the West as something to be associated with the most “evil of evils” since the 1991 Gulf War.
As NATO/GCC backed mercenaries and ultra-conservative Islamic militias battle the Government of Bashar al-Assad in Syria, the Ba’ath Party is once more a phrase that is popping up in the Western mainstream media, mentioned in the kind of tones one would associate with when referring to Nazi Germany.
But what exactly is the Ba’ath Party? How did it start? What does it actually stand for?

The origins of Ba’athism began with the political thought developed by Zaki al-Arsuzi and Michel Aflaq.
Arsuzi formed the Arab Ba’ath Party in 1940 and his views influenced Aflaq who founded the Arab Ihya Movement in 1940 that later renamed itself the Arab Ba’ath Movement in 1943.
Arsuzie was inspired by the French Revolution, the German and Italian unification movements, and the Japanese economic “miracle”. His views were influenced by a number of prominent European philosophical and political figures, among them Georg Hegel, Karl Marx, Friedrich Nietzsche, and Oswald Spengler.

Aflaq is today considered the founder of the Ba’athist movement. From the founding of the Arab Ba’ath Movement until the mid-1950s in Syria and the early 1960s in Iraq, the ideology of the Ba’ath Party was largely synonymous with that of Aflaq’s.

In intellectual terms, Aflaq recast the conservative Arab nationalist thoughts and changed them to reflect a strong revolutionary and progressive tendency which developed in harmony alongside the decolonisation and other events which happened in the Arab world at the time of his life. He insisted the overthrow of the old ruling classes, and supported the creation of a secular society by separating Islam from the state.
The core basis of Ba’athism is Arab socialism (a socialism with Arab characteristics which is not associated with international socialist movement) and pan-Arab ideology.
The ideology presented itself as representing the “Arab spirit against materialistic communism” and “Arab history against dead reaction.”
It held ideological similarity and a favourable outlook to the Non-Aligned Movement politics of Jawaharlal Nehru, Gamal Abdel Nasser, and Josip Broz Tito, and historically opposed affiliation with either the American-led Western Bloc or the Soviet-led Eastern Bloc during the Cold War. 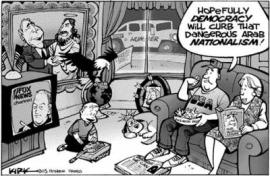 Michel Aflaq, the founder of Ba’athist thought, became the chief ideologist for the Iraqi-dominated Ba’ath Party.
The centre of Aflaq’s Ba’athist thought was the feature ba’ath (literally meaning “renaissance”). This renaissance could only be reached by uniting the Arab nations, and it would transform the Arab world politically, economically, intellectually and morally.
This “future renaissance” would be a “rebirth”, the first Arab renaissance, according to Aflaq, was the origins of Islam in the seventh century.
The Arab nation could only reach this “renaissance” through a revolutionary process towards the goals of “unity, liberty and socialism”. Aflaq believed that the youth were the key for a successful revolution; the youth were open to change and enlightenment because they still hadn’t been indoctrinated with other views.
The party’s main task, before the revolution, was to spread enlightened ideas to the people and to challenge reactionary and conservative elements in society.

According to Aflaq, the Arab Revolt (1916–1918) against the Ottoman Empire failed to unify the Arab world because it was led by a reactionary class. He believed the ruling class, who supported the monarchy as the leaders of the Arab Revolt did, were synonymous with a reactionary class.
Aflaq was bitterly opposed to any kind of monarchy, and described the Arab Revolt as “the illusions of kings and feudal lords who understood unity as the gathering of backwardness to backwardness, exploitation to exploitation and numbers to numbers like sheep.”
The only way to combat the reactionary classes laid in “progressive” revolution, central to which is struggle for unity. This struggle could not be separated from the social revolution – to separate these two would be the same as to weaken the movement.

A major obstacle to the success of the revolution is the Arab League. Aflaq believed that the Arab League strengthened both regional interests and the reactionary classes, thus weakening the chance of establishing an Arab nation.

Aflaq saw liberty as one of the defining features of Ba’athism. It was liberty, according to Aflaq, which created new values and thoughts. Aflaq believed that living under imperialism, colonialism, religious or a non-enlightened dictatorship weakened liberty.
One of the Ba’ath party’s main priorities according to Aflaq, was to disseminate new ideas and thoughts; to give individuals the liberty they needed to pursue ideas. According to Aflaq, liberty could not just come from nowhere, it needed an enlightened progressive group to create a truly free society. In Aflaq’s vision liberty would be ensured by the Ba’ath party.

For Aflaq, socialism was a necessary means to accomplishing the goal of initiating an Arabic renaissance period, in other words, a period of modernisation.
While unity brought the Arab world together and liberty provided the Arab people with freedom, socialism was the cornerstone which made unity and liberty successful. In Aflaq’s view, a constitutional democratic system would not succeed in a country such as Syria that was dominated by a “pseudo-feudalist” economic system in which the repression of the peasant nullified the people’s political liberty.
Liberty meant little to nothing to the general poverty-stricken populace of Syria; Aflaq saw socialism as the solution to their plight. Socialism was a system which freed the population from enslavement and created independent individuals.
However, economic equality was a major tenet in Ba’athist ideology; the elimination of inequality would “eliminate all privilege, exploitation, and domination by one group over another”. In short, if liberty was to succeed, the Arab people needed socialism.

The essence of Islam, according to Aflaq, was its revolutionary qualities. Aflaq called on all Arabs, both Muslims and non-Muslims alike, to admire the role Islam had played in creating an Arab character. But his view on Islam was purely spiritual, and Aflaq emphasised that it “should not be imposed” on state and society.
Time and again Aflaq emphasised that the Ba’ath party was against atheism, but also against fundamentalism; the fundamentalists represented a “shallow, false faith.”
Aflaq was a strong supporter of secular government, and stated a Ba’athist state would replace religion with a state “based on a foundation: Arab nationalism, and a moral: freedom.”

During the Shia riots against the Iraqi Ba’ath regime in the late-1970s, Aflaq warned Saddam Hussein of making any concessions to the rioters, exclaiming that the Ba’ath Party “is with [religious] faith, but is not a religious party, nor should it be one.”

Based on Wikipedia info