* I am a sensitive writer, actor and director. Talking business disgusts me. If you want to talk business, call my disgusting personal manager.
* I’m a patriot of the heart.
* I believe there’s an inner power that makes winners or losers. And the winners are the ones who really listen to the truth of their hearts.
* Rambo isn’t violent. I see Rambo as a philanthropist. 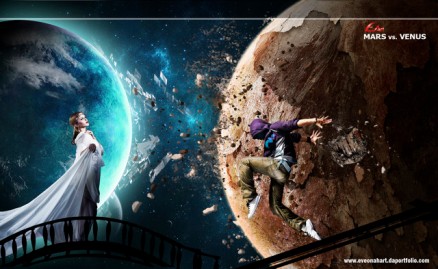 In astrology Mars is the passionate impulse and action, while Venus tends to the overall relationship atmosphere. Mars is the masculine aspect, and this goes beyond sex into your drive, discipline, will-power and stamina. Venus is the feminine aspect, and tempers Mars to smell the roses along the way.
Mars needs a mission, and can stir up serious trouble when repressed or twarted. Mars was named after the Roman God of War, and is also known as “the bright and burning one.”

Venus is desire and love.

It indicates the mother and nurture, cheerfulness, friendship, companionship, the acquisition of property, the purchase of ornaments, agreements on favorable terms, marriages, pure trades, fine voices, a taste for music, sweet singing, beauty, painting, mixing of colors both in embroidery, dyeing, and unguent making.

Stallone doesn’t regret the way Rocky took over his life. In fact, it’s his favorite role. … Yet there’s a nostalgia that creeps into Stallone’s voice today when he talks about his wishes to return to serious acting, to serious roles that don’t depend on flexing his muscles and flying through the air with danger all around.

– Stallone: I believe that a good cigar, a glass of wine and a good conversation is as close to euphoria as you can get in a legal sense.
– Mott: Could you elaborate on that scene?
– Stallone: OK. I would probably open a very fine bottle of wine or an Armagnac. And, I’d want to be watching a dramatic film. Not an action film, not a comedy. But a dramatic film. In the darkness of the room, the smoke would slowly filter out in front of the screen, rise up in this very sensual manner.  The low light would refract through the wine glass. It’s almost like I’m on the outside looking in and I have this constant stimulation of the palate…
People who smoke cigars tend to be much more patient than cigarette smokers… You don’t just flick it and start a new one. Sometimes a cigar does not function perfectly and it takes a little bit of coaxing. Many people don’t have the perseverance and the patience…
I think of a cigar as old. I think of it as reaching back into antiquity; though it doesn’t go that far back, I think of it as that. And I think it is one of those things like a fine wine that has moved on into the modern era but the beauty of it is ancient. I hate to see the modernization… I’m a traditionalist.

It’s not easy being Sylvester Stallone.
Think about it: How many filmmakers have created two characters who so neatly embody the conflicting sides that live inside every guy? The romantic and the warrior; the dreamer and the destroyer; the underestimated and the misunderstood; the lonely and the loner; the Rocky and the Rambo.
Stallone is all of us. A guy who gets no respect for what he’s accomplished, because the establishment, no matter what he does, will see him as they want to see him.

– When people rip on you, does that hurt?
– No. My life is like many performances; it’s a duality. There’s a public persona which is completely founded on the character you play. That’s who people think you are. And when you do things that are out of character, you’re held to that standard: “Rocky wouldn’t do that.” You have to realize that’s out of your control.
I’m not as simple or as ethical as Rocky, and I’m not as tough as Rambo. I’m impressionable and given to highs and lows — not depression but… I go through this carnival of emotions all the time.
Do I know who I am? I know I’m incredibly unpredictable, and that’s the only thing I’m sure of. And that’s helped, because it’s almost a sense of wonderment that has allowed me to think I can still do The Expendables, to still go into fantasyland….

– Are you a religious man?
– I’m pretty spiritual; I believe a lot in the spirit of man. I’m certainly not an atheist.… I was baptized Catholic, but I don’t belong to a structured church. I have no opposition to it. I think there’s great nuggets of knowledge in there, some wonderful rules to live by…

– What films influenced you as a kid?
– The thing that changed my life was Hercules starring Steve Reeves

The greatest of all heroes in Greek mythology, Hercules was the strongest man on earth. Besides tremendous physical strength, he had great self-confidence and considered himself equal to the gods. Hercules was not blessed with great intelligence, but his bravery made up for any lack of cunning. Easily angered, his sudden outbursts of rage often harmed innocent bystanders. When the fury passed, though, Hercules was full of sorrow and guilt for what he had done and ready to accept any punishment for his misdeeds. Myth Encyclopedia

– Do you have a mantra?
– “Be realistic, and take it as far as you can—but know your limitations. You can’t be better than you are.” Many people — and I’ve done it — overshoot their abilities, and then you have this incredible sense of rejection and anger. And the other is, “Listen to your inner voice.” Who’s going to betray you less?

– You said something once which broke my heart: that you remembered two times that your mother ever kissed you.
– Once. Once, fleetingly.
– When was that?
– I think it was when there was a divorce. I hope you put this in: I don’t hold it against her, because she was treated that way, so she didn’t know any better. But yeah, that was…
– That pain never leaves us.
– You don’t ever, ever get over that. There’s no closure for things that happen during your childhood. You’re wet clay, and that’s a dent that’s been put in the clay. You can’t buff or sand it out; it’ll always have that fissure. So you’ve got to be careful, what you say to a kid; it buries itself in the heart like a hatchet. And you can’t fix the wound. I don’t care how much loving and kissing and adoration.

– Is there something your father taught you that you still think about?
– I inherited a kind of feistiness that I can definitely feel in Rambo. That’s where it really comes out, that kind of…primal rage. My father would fight with anybody.
– But you’re not a violent guy.
– [laughs] No, I’m not. I only get angry when honor has been dismissed or betrayed. I know it sounds corny, but when you wear your heart on your sleeve and you’ve been betrayed? My God, it’s so deep, that wound. I fill up just thinking about it, and I identify with people who’ve been betrayed by someone they’ve loved. There’s nothing worse.
– So where does that come from, for you?
– Oh, probably really early on. I don’t want to get too psychological; people will say, “Oh, he’s unhappy with his childhood.” I didn’t have a perfect childhood, but I’m a believer in this, too: I wouldn’t be here with a perfect childhood…

– In that house, what most defines you?
– If it still existed? Or I could still have it?
– You pick.
– Well, it’d be a cowboy hat from like 1958. I was 11. It came with a cap pistol and a picture of a horse. Again, it was all about heroes. Wild Bill Hickok, Davy Crockett. So I got one of these cowboy hats. And that stupid thing— it was smelly, moldy, floppy—but man, whenever I put that hat on… [Stallone goes quiet, looks down, then bites his lip and turns away.]
– Was it a gift?
– Yeah, I think my mother bought it.
– A few days later, I get a call from Stallone.
– Mr. Stallone?
– Hiiiiiiiii….
– What’s going on?
– No, everything’s fine. I just wanted to request that if you’re gonna write anything about my mother, please make it neutral…
– I was intrigued by your memory of the cowboy hat.
– Oh, I came up with something that’s even more precious to me — a cardboard box that I’ve had since I’m 9 years old. And on this cardboard box is the first thing I ever drew.
– What is that?
– Believe it or not, a Masai warrior. I should have shown it to you. It was very detailed and exacting; you can see the savanna in the background, as this warrior, in full regalia, is coming over the hill holding a spear and a shield
– Why a Masai warrior?
– I was sitting at home, because I always spent a lot of time at home, and I wanted to impress my dad. I wanted to show that I am different than what he thinks I am. That I could actually do something worthwhile. That’s what inspired me. So there was this album, a soundtrack, and there was a picture of this warrior. And I started to draw it, and I just nailed it. I thought, “Boy, he’ll be really impressed.” I drew the cover of his album that he loves so much, and all he says is, “Where’s the stuff that was in the box?”
– Maybe you should’ve said, “Where’s the stuff that was in your heart?”
– Yeah. I just wanted to pass that on to you…. But the mother thing’s a real delicate matter.

– You’re a romantic.
– Yeah! There you are! Totally! People think I’m foreboding and—what would you say? — a physical presence that’s intimidating.
– Menacing.…
– Yeah, and it’s not true at all. That’s the character I play. But yeah, I’m a hopeless romantic.

Sylvester Stallone was a difficult birth, yanked from his mother’s womb by a doctor’s forceps that severed a facial nerve. As a result, the lower left side of his face is paralyzed, including parts of his lip, tongue, and chin, an accident which has given Stallone his trademark snarling look and slightly slurred speech.
He spent his first five years in Hell’s Kitchen, bouncing between foster homes while his parents endured a loud, troubled marriage.
Eventually reunited with them, Stallone’s odd face made him an outcast in school, where he was often suspended for fighting, other behavior problems, and poor grades.
His father, a beautician, moved the family to Washington DC, where he opened a beauty school. His mother, a flamboyant woman who has become something of a celebrity in her own right, opened a women’s gymnasium in 1952, called Barbella’s. They divorced when Stallone was 11, and he was later sent to a special high school for “troubled kids,” where he was voted “most likely to end up in the electric chair”.